Sharon Feinstein travels to Venice, home of the first ghetto, and discovers how the city’s natural beauty has kept artists mesmerised for centuries

There’s a new wave of travellers, harking back to the 18th century ‘Grand Tour’ of Europe, that educational rite of passage for the privileged few. Cultured tourism for those with taste, time and means, where you attempt to like a local, imbibe the history, language and way of life.

So I came to Venice for a month, which turned into three months, to live like a Venetian, where the Grand Tour always ended up. Byron arrived after Napoleon had smashed up its 1,000 year glory. They found poetry in its tragic, melancholic state, and Venice was reborn as a centre of carnival, fashion, gambling and feasts. 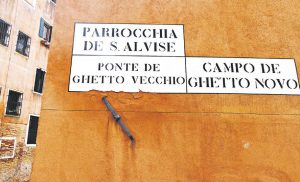 Signs for the Jewish ghetto, dating from 1516.

Jews mistakenly think of Napoleon as a saviour because he tore open the ghetto gates. But this wasn’t an act of emancipation, it was a loathing of religion and a miracle he didn’t destroy the five magnificent ghetto synagogues as he ransacked so many of the city’s 118 churches. With Napoleon, Venice plunged into misery, but resurrected herself as she’s always done and is doing again. Sadness and splendour seem to be the default settings in this city. Beset by threats to her survival, Venice deals with adversity by wowing the world, reviving Carnival, creating the Biennale, Film Festival and attracting global aficionados.

Within weeks, I ran into Damien Hirst, singer Zucchero and Hollywood’s Adrien Brody, all in my new hood, Dorsoduro. To live like a 15th century noble, you must get to know Filippo Gaggia, director of luxury rentals firm Views on Venice. He even played a character in the Jolie/Depp movie, The Tourist, while staying in his Gothic Palazzo Loredan Dell’Ambasciatore, once home to two doges, historically the most senior elected official in Venice. I lived briefly in this opulence, masquerading as an English dogaressa in the vast terrazzo living rooms surrounded by stone sculptures, waking to those special sounds of the watery city, gondolieres’ cries, bells clanging out the hours, water slapping on stone. And that play of luminous light, which has mesmerised painters across centuries, splashing gold on my balcony. I shifted my carved desk outside with views over the Grand Canal. Gaggia’s palazzi are the stuff of fantasy. Period furniture, vibrant Venetian reds and gold, bathrooms of splendour, a largesse known only by nobility who still dominate this timeless city.

I enrolled at Venice Italian School, my improving Italian bringing gusts of great pleasure, especially at my local baccaro, Bottegon, when ordering ombra (wine) and cicchetti (tapas plates). There’s a sweet sense of belonging when you reel off some decent Italian and down your glass of Friuli-Venezia Giulia with locals. To understand Venice’s secrets, from someone with a rare storyteller’s gift, guide Luigina Romor transforms the city’s tales into a kaleidoscope of history and legends. Our tours crossed eras, palaces, churches, islands… her knowledge and imaginative approach was a total delight. Venice is built upon the mud and swamp of the lagoon atop millions of submerged tree trunks, which, having been starved of oxygen for centuries, now lie ossified and supporting this strange, fragile place. If the water recedes, and the piling system is exposed to oxygen, it all crumbles like a pack of cards. But Venice isn’t just a city, it’s a feeling, a journey of the imagination.

I made an art out of good eating, pounding the streets to discover the best restaurants. Top is Do Forni, behind Piazza San 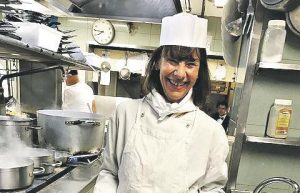 Sharon enjoys the heat in Do Forni’s kitchen.

Marco; traditional and romantic, it is like a set piece in an Antonioni movie. Owner Eligio Paties has cooked for the Pope, Princess Diana and a long line of A-listers, who have all signed the legendary leather-bound book. I was allowed in its hallowed kitchens to cook with head chef, Mimo, who kept his cool in the face of my blunders and multiple orders coming in with bullet-like speed. Upstairs is Italy’s third most important wine cellar. Smaller, more intimate is Da Ivo, good enough for George Clooney’s stag night, run by the bear-like Giovanni Fracassi, who has a crippling handshake and heart of gold.
Antiche Carampane, in the back streets of Rialto, the first banking and trading post, is family-run by passionate Francesco and his mama, specialising in creative fish dishes and is famous for the legendary raw fish antipasto. I returned often to local gem Oniga; artistic, quirky, with shiny brass pots dangling from wooden beams, and inspired, organic dishes.

For shopping it’s Empresa for artistic clothes, Atelier Segalin di Daniela Ghezzo for bespoke shoes, and Nina for sharp fashion. Venice is always about the water, a mythological virgin born from the lagoon. Ironically, the only hospital faces the only cemetery on San Michele island, unless you’re Jewish and taken by boat to the Lido cemetery, just east of the lagoon city. Coffins used to be rowed by gondola to San Michele, but now only gondoliere and Patriarchs have that romantic privilege. The rest are taken by motorboat hearse, poetically, across the lagoon. So you’re taken by ambulance boat to hospital to enter the world and to your final resting place via water again. Such is the circle of life in Venice.

Thanks to our videomaker Gianpaolo Cerato for yet another wonderful work. Enjoy!

Enjoy shopping at Rialto Market to pick your fish and seasonal vegetables, and then have a cooking lesson or just enjoy the dinner!

The most spectacular way to say goodbye to the Carnival 2103: a water parade of traditional boats and gondolas floats along the Canal Grande, lit only with candels. Starting from the concept of a dark and silent city, the event of the “Vogata del silenzio” aims to create an unique moment: a water parade of traditional rowing boats will float along the Grand Canal, from Rialto to San Marco.

The total absence of motor boats will be added to the natural scenography of the facades of the palaces along the Grand Canal including Palazzo Loredan and Palazzo Alverà lit only by candles, recreating a dreamlike and unique Venice.
When the parade will reach Punta della Dogana, a symbolic goodbye to 2013 edition will take place, with wishes to see everyone back in the 2014 edition of the carnival.

Subscribe to our Newsletter & don't lose any VOV News & Offer!

This site uses cookies. By continuing to browse the site, you are agreeing to our use of cookies.

We may request cookies to be set on your device. We use cookies to let us know when you visit our websites, how you interact with us, to enrich your user experience, and to customize your relationship with our website.

Click on the different category headings to find out more. You can also change some of your preferences. Note that blocking some types of cookies may impact your experience on our websites and the services we are able to offer.

These cookies are strictly necessary to provide you with services available through our website and to use some of its features.

Because these cookies are strictly necessary to deliver the website, refuseing them will have impact how our site functions. You always can block or delete cookies by changing your browser settings and force blocking all cookies on this website. But this will always prompt you to accept/refuse cookies when revisiting our site.

We fully respect if you want to refuse cookies but to avoid asking you again and again kindly allow us to store a cookie for that. You are free to opt out any time or opt in for other cookies to get a better experience. If you refuse cookies we will remove all set cookies in our domain.

We provide you with a list of stored cookies on your computer in our domain so you can check what we stored. Due to security reasons we are not able to show or modify cookies from other domains. You can check these in your browser security settings.

These cookies collect information that is used either in aggregate form to help us understand how our website is being used or how effective our marketing campaigns are, or to help us customize our website and application for you in order to enhance your experience.

If you do not want that we track your visit to our site you can disable tracking in your browser here:

We also use different external services like Google Webfonts, Google Maps, and external Video providers. Since these providers may collect personal data like your IP address we allow you to block them here. Please be aware that this might heavily reduce the functionality and appearance of our site. Changes will take effect once you reload the page.

The following cookies are also needed - You can choose if you want to allow them: